Early results suggest that the management of investment services in banks and credit unions expected a larger drop in revenue in the second quarter than they experienced.

Cramer + Associates has published its monthly BD Revenue Report for June, and it indicates that the 21 bank BDs that Cramer follows experienced a 12.3% decline in revenue between the first and second quarters.

In early May, Kehrer Bielan conducted a survey of investment services managers in 54 banks and credit unions to assess the impact of the Pandemic on their businesses and how they were working to mitigate the impact.  The survey provided data for a series of webinars on the “Industry in Transition” we are conducting with BISA.  At that time, the 54 firms estimated that quarter-over quarter revenue would decline by 23%, on average.

The difference might be due to the difference in the sample.  Almost all the firms that Cramer follows are bank-owned BDs, while the firms in our survey are split evenly between bank-owned BDs and institutions that partner with 3rd party BDs.  But there was little difference in the revenue projections in our survey between the large banks and the regional and community institutions that work with 3rd party BDs.  The smaller firms expected a 24% decline, on average.

And both surveys found similar actual revenue performance in the first quarter.  The Cramer firms were up 12.1% quarter-over-quarter, while the 54 firms in our survey were up 14%.

The difference between the firm’s expected performance and actual performance could also be a result of the lag in the receipt of fees from advisory business. Some robust first quarter fees on managed money did not hit the firms’ books until the second quarter, easing the revenue hit. 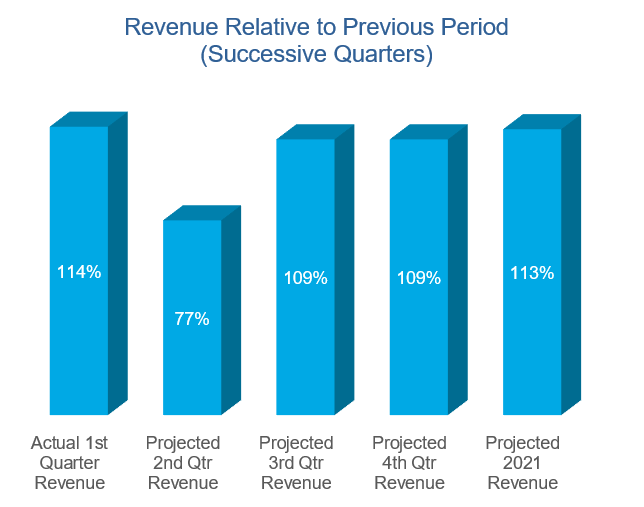 The projections for the 3rd quarter are markedly different between the large firms and the smaller ones, however.  Managers of the bank-owned BDs expected a V-shaped recovery, with revenue rebounding 15% QoQ, while the firms that partner with 3rd party BDs anticipated revenue inching back a tepid 3%, quarter over quarter.